The girl who takes photos of homosexual love

Admin
Tổng số bài gửi : 2357
Join date : 03/10/2010
Age : 34
Đến từ : Cần Thơ
Spending more than a year with same-sex couples, Maika has grasped many impressive moments about them. After she completed the photo collection, some people asked Maika whether she “belongs to that world?” 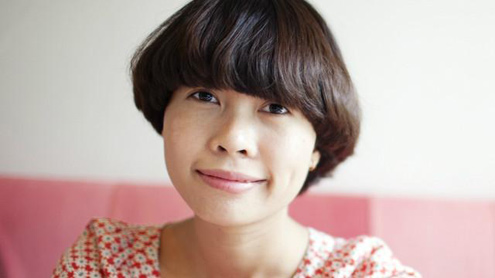 'Love is love' is the photo collection depicting the life, the love of homosexuals by the Hanoi girl Maika Elan whose real name is Nguyen Thanh Hai, 26.

In over one year of living with same-sex couples in Hanoi, HCM City and other provinces, Maika recorded many impressive moments. But in the upcoming exhibition this month, she will introduce only 45 photos.

In 2010, Maika took pictures of homosexuals while attending a photographic course in Cambodia. Accidentally visiting a tourist guide site, she knew which hotels are for gay people so she went there and asked their permission to take pictures. She received their permission and cheerful cooperation. Previously, as she had not understood about homosexuals so she did not think the work would be so smooth.

After the course in Cambodia, Maika forgot this topic. Once she visited a photo exhibition of her friend and found that gay characters are often masked or turned away. In a number of films on the subject of gays, homosexuals become ridiculous joke or they have sad lives.


"The fact that gay people I have met are not pessimistic, 'ugly' as what is reflected in the movies. I used to have time to take photos for fashion magazines and have many friends of the third world. They are always happy and love life," said Maika.

The Pink Choice - Love is love was born from it. The pictures are moments of life, love and care for each other of same-sex couples under the perspective of a young girl.

Maika said that what she tried to seek is that love is beautiful in nature, for everyone no matter how their sex is.

"I want that heterosexuals are jealous with the love of the people who they have thought to be are different. The affection that homosexuals give each other is normally and naturally like any other couple," she said.

Maika said the most difficult thing in this project is to contact the couples. She asked for Nguyen Van Dung’s help. Dung is a gay, a journalist who wrote an autobiography and called for protection for homosexuals. Thus, Maika did not face difficulty in accessing and taking pictures of same-sex couples in Hanoi, but in Ho Chi Minh City, she had to call and persuade them to be photographed.

The 26-year-old photographer said that more than 70 couples took part in the “Love is love” project. Among the pictures she took, only one third can be used; the rest are not satisfactory. Most of the characters live in motels, especially those live in Hanoi and HCM City. To take picture of more than 30 couples in Saigon, Maika stayed there for a half of year.

For one and a half year living with same-sex couples, Maika kept their stories for herself. She was only interested in observing, feeling, and "grabbing" the most natural moments when they expressed their feelings through their regular activities such as reading, watching a movie, bathing...

Before seeing the characters, Maika usually knew their love stories already. To create closeness, she invited them for a drink, where they chatted about fashion, singers, movies, etc. not about their relationships.

Among her works, Maika is impressed with the picture of a young man who was chewing bread, lying in bed to watch TV with his boyfriend. They are a soldier and a motorbike driver, and sometimes they saw each other at a motel room. When they are not together, that room is leased to be used as a tea shop.

The picture featuring a man taking care of his boyfriend who was sick in the hospital is also very touching.

Maika said she spent at least one day with a couple. Normally she went to their home in the morning and left at 1-2am. "At their home, I behaved like a normal friend. If I felt sleepy, I slept. Sometimes we cook together," she said.

Stepping into the world of gays, she "felt lucky to meet lots of happy people."

After completion, “Love is love” has received mixed opinions of heterosexuals and homosexuals. Maika was even suspected to be a homosexual. Many people asked whether she belongs to that world. Maika only laughed and said that her boyfriend is also a photographer.

Graduating with a degree in sociology at the University of Social Sciences and Humanities in Hanoi, Maika works as a freelance for fashion magazines.

Maika said this project has received funding from the Danish Cultural Fund. After the exhibition in Hanoi, Maika will introduce these pictures in Ho Chi Minh City.