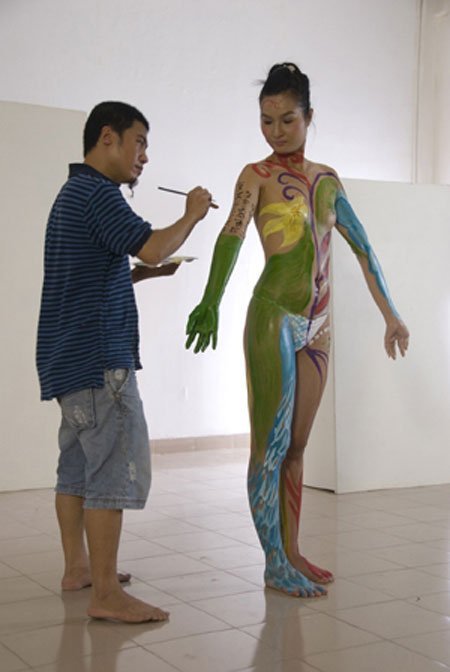 
In Vietnam, Phuong Vu Manh is one of the pioneers in practicing body painting. He made the first work in 1996, on the body of his friend, who is also an artist. However, the first body painting works he introduced to the public are the works on buffaloes.

The second time he had a chance to show body painting in public is at the Lanh Giang temple festival. This time he painted on the body of male models, who wore loin-cloths to be appropriate to the nature of the festival.

In March 2010, in the “Life” exhibition at the French Cultural Center - L'Espace - in Hanoi, Phuong Vu Manh “dared” to use three female models. However, in this exhibition, the cultural management agency did not allow the models to be completely nude nor to wear bikini-styled underwear.

Phuong Vu Manh said that he brought out the above examples to show that there are many barriers to bring body painting art to public, and to make people not think that body painting is vulgar. What to draw and how nudity models are always controversial.

According to Manh, in Vietnam, the biggest barrier for body painting is the Asian culture. So finding a model is very difficult.

Artists like painting on the completely nude body but models are often afraid and they still wants to wear underwear. As clothing and paint sometimes do not fit in with each other, the painter’s emotion is affected.

Some painters encounter opposition from their girlfriends, who do not want their lovers to "touch" the body of other women. Body painting artists also suffer from the “doubt” of surrounding people.

In addition, body painting artists have to go beyond themselves, their human instinct before beauty. They must be extremely focused on their job because body painting does not allow to sketch.

The difficulty of body painting is that the artist cannot sell their works or photos of their works. They cannot also organize exhibitions to sell tickets.

The search for materials, mixing paints to last long on the body of models also takes time and effort. A painter has to spend many hours to make a body painting work, which can only exist in two days. To open an exhibition, it requires a lot of works and, of course, the cooperation of many artists. But most artists are not interested in this art type because they cannot earn money from it.

Additionally, management agencies are not "open" enough to accept this new, sensitive art so it is very difficult to get a license to hold an exhibition.

Manh said he did not earn much from body painting. He pursues this art to satisfy his creativeness and to show the world that Vietnam also has body painting art. He does not intent to invest highly in this art because according to him, it needs a lot of effort, time and also money. 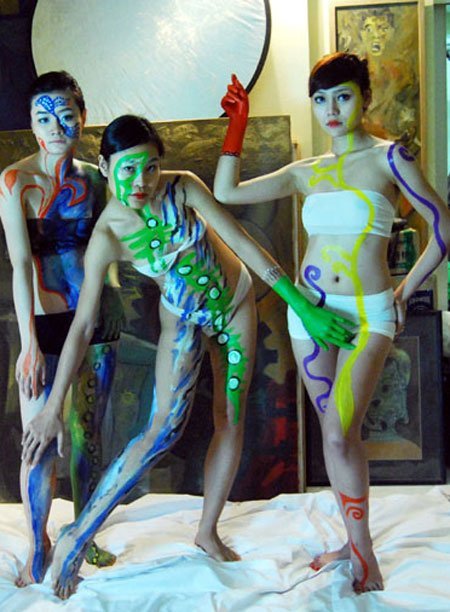 Khanh said he had seen several works by Phuong Vu Manh but only a few of them can be considered as artworks since the artist did not invest his mind on them.

Painter Ngo Luc said that it is a big problem for body painting artists like him--which the public hardly knows about their work because they cannot open exhibitions.

"An artwork is impossible to be exhibited in the form of photos. To hold an exhibition, artists have to show their works to the relevant agencies to get permission. I cannot take my models to the culture management agency and ask them to be nude for censorship," Luc said.

He told VietNamNet that he used to participate in a lot of body painting demonstrations, but he had never asked for a license because it was the job of the event organizing companies. 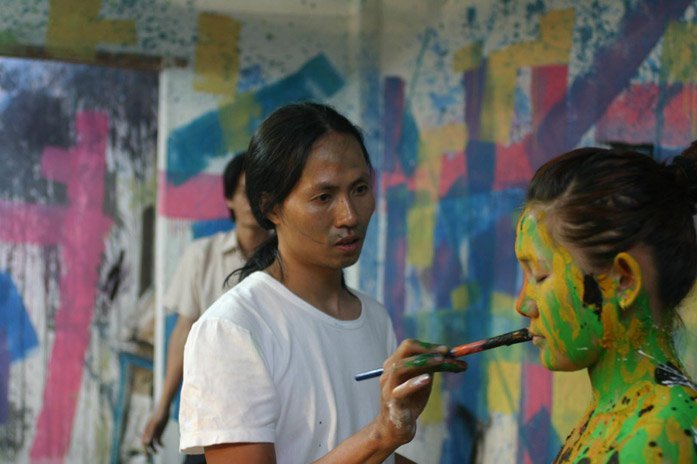 
Luc said he could only make his body painting works in the studio, then took photo and uploaded to the Internet. He dared not make them before the public. If he dared, he would be not allowed by the authorities.

Hoang Anh, a body painting model, said she knew body painting art through the Internet. Knowing that Phuong Vu Manh is a pioneer in body painting in Vietnam, she voluntarily worked as a model for him.

She said modeling is very stressful because she had to stand for a few hours. Every time the brush touched her skin, she felt very uncomfortable. Painters often use acrylic paint for drawing; therefore, during the modeling process, the model cannot move to not make the paint peel off. That is not to say, paint is harmful to the skin.

Sometimes Hoang Anh had to pay for makeup and hair to have the best pictures. However, she did not dare to show them to her relatives or friends.

Hoang Anh worked as models for Dao Anh Khanh and Phuong Manh Vu and performed at Dao Anh Khanh’s home, for small groups of audience, where she got mundane eyes.

With cultural barriers and meager remuneration, many young people do not want to engage in this art.

What is there to struggle? 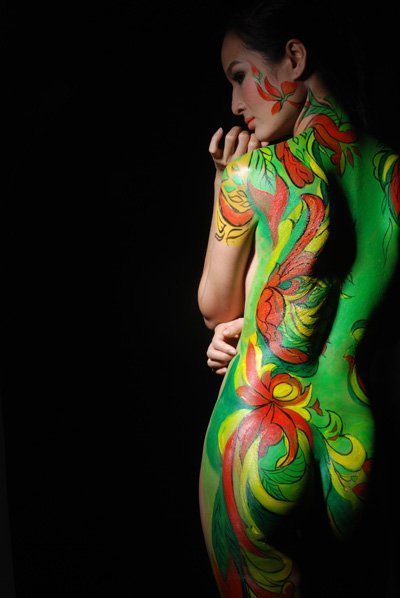 While body painting artists said they were struggling to find their way out for their work to the public, Mr. Nguyen Thanh Nhan from the Performing Arts Agency said it is not a big problem to get a license to hold an exhibition.

"Many contemporary artists always complain of lacking space for creativity, the interest of state agencies, the understanding and sympathy of the audience and they believe that their works are for themselves only. I saw some body painting works but only a few of them reached artistic level,” Thanh said.

Thanh said that it is another matter when body painting art flourishes in the world but in Vietnam, it is still new and whether this art is necessary to consider as an indispensable art in Vietnam. “The art itself is in itself, if the artwork is good, the viewer will find out and enjoy it," he said.