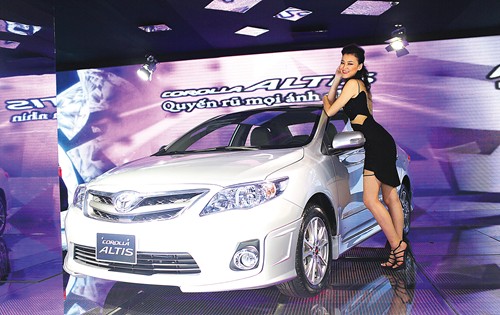 Manufacturers have decided to spend more money on car part projects in an effort to increase the proportions of locally made contents of products, because this is an important solution which allows reducing the production costs.

In 2004, Toyota Vietnam set up the production line capable to churn out 15,000 cars per annum. Also in that year, it established an export car part center which makes some car parts to provide to 13 branches of the group all over the world.

In 2008, Toyota set up a factory specializing in making chassis for Innova cars with the capacity of 21,000 products a year, which, together with the other 13 car part suppliers, the six car models of Toyota (Vios, Corolla, Camry, Innova, Fortuner and Hiace) all have relatively high localization ratios of between 19 percent and 37 percent.

By 2011, the car models of Toyota had had 253 parts made in Vietnam. Yoshihisa Maruta, General Director of Toyota Motor Vietnam, said that since the domestic supporting industries remain weak, Toyota has to think of making car parts itself.

Like Toyota Motor Vietnam, Ford Vietnam and GM Vietnam have also invested in the car part projects. GM Vietnam’s General Director Gaurav Gupta said the manufacturer’s localization ratio in Chevrolet model is 23 percent, and he expects to see a higher figure in the coming time.

A senior executive of Ford Vietnam also said Ford Vietnam has been following a program on increasing the locally made content proportions in Vietnam, considering this the best solution to raise its competitiveness in a market which would be fully opened by 2018.

While automobile joint ventures have been trying to localize their products, Vietnamese manufacturers dream of the cars 100 percent made in Vietnam.

With the total investment capital of 185.5 million dollars, the factory is expected to have the capacity of 20,000 engines per annum, while the first products would be churned out in 2013.

In 1992, it spent 10 million dollars on the factory that makes prototypes for tires and casts car parts.

In 2003, Vinaxuki spent nearly 20 million dollars on a modern factory which allows to localize cabins and chassis with the production prices lower than the imports’ prices by 40 percent.

In 2004, the company set up the electrolytic dissociation dip painting line.

Vinaxuki’s General Director Bui Xuan Huyen then decided to make investment in the project on making cars capitalized at 930 billion dong, in a land plot covering an area of 20 hectares in Dong Anh district in Hanoi. The project has created the car with the locally made content ratio of up to 56 percent.

The new car model was introduced at the latest automobile exhibition. Huyen revealed that the car priced at less than 300 million dong, is expected to hit the market by the end of this year.