500,000 Vietnamese are bitten by dogs annually

Admin
Tổng số bài gửi : 2357
Join date : 03/10/2010
Age : 34
Đến từ : Cần Thơ
Due to half a million of people are bitten by dogs each year, the Ministry of Agriculture and Rural Development (MARD) aims to firstly know the exact number of dogs for vaccination, not to give a code for each dog. 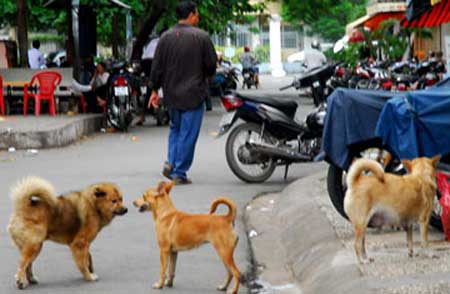 Mr. Van Dang Ky, Head of the Epidemiology Division of the Veterinary Agency, said the recently issued decision of the MARD is part of the national program to control and eliminate rabies in Vietnam for the period of 2011-2015.

The MARD and the Ministry of Health are working together to raise awareness of the public about rabies as well as improve the quality of surveillance systems of the veterinary sector and local authorities.

Requiring pet owners to register with the commune and ward governments to be given a number for their pets is to firstly have accurate statistics of the total number of dogs in the country by now, which is estimated at around 6-8 million. Over the years of investigation, the source of rabid infection is determined to mainly come from dogs (95-97%) and then cats.

"The goal of the program at this stage is to manage and vaccinate for over 70% of the total dogs in order to reduce the number of deaths caused by rabies, not to grant the code to each pet," Ky emphasized.

The official said that due to the plan was approved late; the budget for this plan has not been allocated so it has not been implemented synchronously in the country. Currently, only Ho Chi Minh City is relatively well managing pets through the use of the pet management record. In the city, pet owners have to register their pets with the local authorities.

To implement the plan, the Veterinary Division will give specific instruction on the pet registration to each locality. The registration process will be very simple to facilitate people. Pet owners will have to only register their pets with their village chiefs, not to the People's Committees of communes and wards.

The establishment of specialized teams to capture wandering dogs and cats will not be carried out right now because the relevant agencies are learning this model from other countries. For the provision of killing derelict pets after three days, Ky said the Veterinary Division would propose to change because this is inhumane.

According to official statistics, about 500,000 people are vaccinated annually after being bitten by rabid or suspected rabid animals (mainly dogs and cats), but Ky said the actual number is much higher because many people are not vaccinated.

"Although the number of deaths due to rabies is many times higher than other infectious diseases but local governments have not paid adequate attention to it. I hope in the near future, local authorities and people will change their awareness of this disease," Ky said.